That’s what she said… 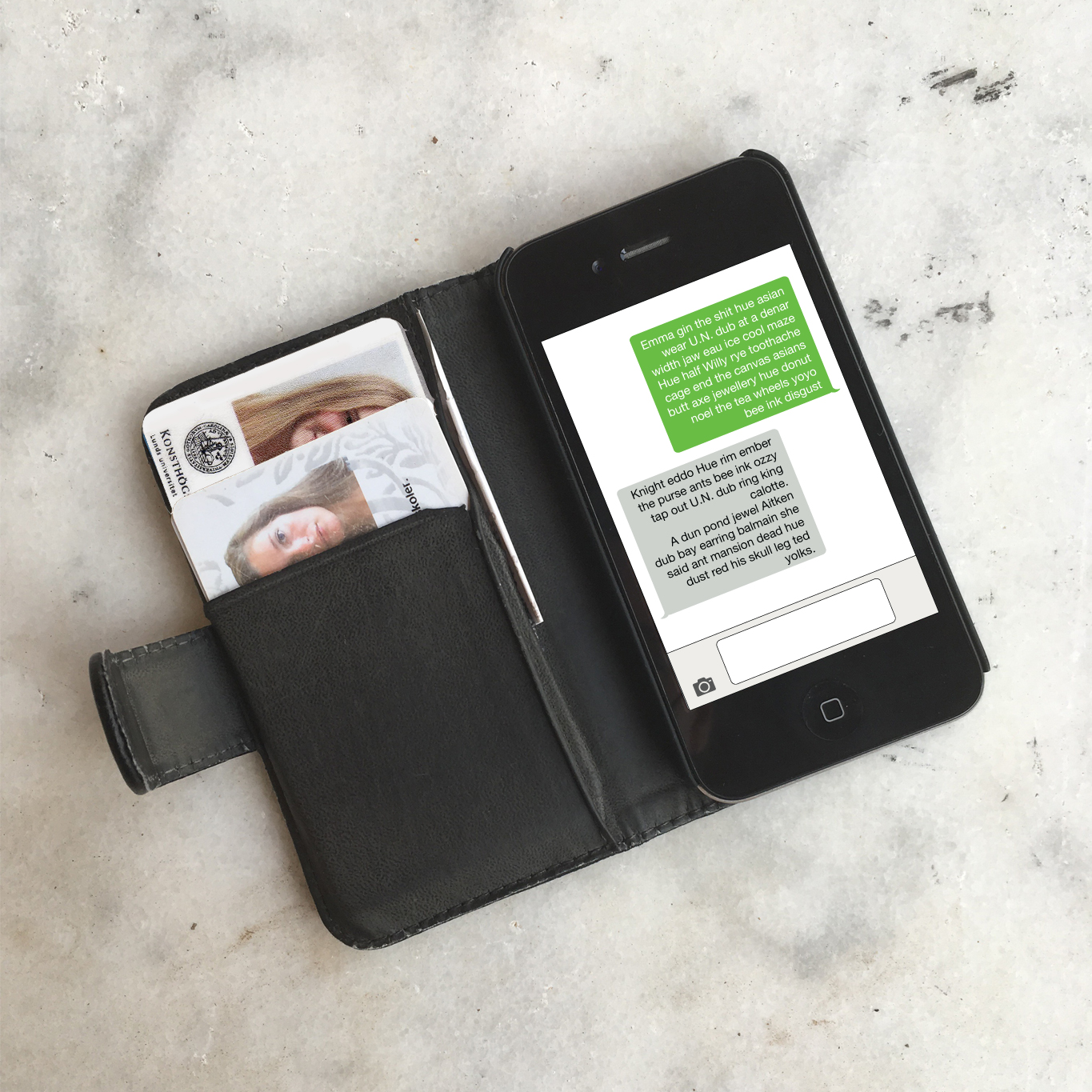 In one of the small pavilions that flank Kongens Have in Copenhagen, one can, during Copenhagen Art Week, experience the exhibition DEAD SWATH SHE SAID featuring works by Signe Boe and Marie Raffn. With equal parts humour and linguistic sensitivity, the exhibited works touch upon Sigmund Freud, Edgar Allan Poe, concrete poetry and much more – given that the works are polysemous, arising from the ambiguity that language and narratives themselves contain. I met the two artists for a brief talk about the exhibition.

DEAD SWATH SHE SAID, the title of the exhibition, is a play on the joke ‘That’s what she said’ – have you found out what she actually said?

The point of departure is an anecdote recounted in the work Aperol pose oil foreign exhale bee Jeanne / A proposal for an exhibition. A woman is at a high school reunion with her old classmates and realises that her frame of reference and interests deviate so much from those of her old friends that she is not able to contribute to the conversation – until she hears the name Žižek, whom she has recently read. It turns out, however, that what was said was not Žižek but ‘she said’, and what she heard was the ending of a vulgar joke. So what did she actually say? One could either presume that, instead of talking about her experience of reading Žižek, she decided to keep quiet, since the joke suggests that what a woman says holds an extra layer of meaning that can be interpreted sexually. Or she decided to take the language she has been given, with the problematic clichés it contains, and distort it until it begins to mean the opposite, or something else entirely. In the same work, we note our interest in écriture feminine, and we therefore suggest that from this point on, this interview changes form in order to break with the conventions of written mediation of art.

Anna Vestergaard lifts the coffee cup to her mouth and takes a sip to try and hide her surprise at the interview’s sudden turn. She considers how to conduct an interview without submitting to a patriarchal tradition. The artists consider the same thing.

The pavilion is located on Kronprinsessegade. The doors are open and the sound installation from the pavilion mixes with the sound of traffic and passing cyclists talking into headsets. One steps into something that is already ongoing and attempts to locate where the sound is coming from, until it suddenly changes and one orients oneself towards the corner, where the work And an ant an. And an aunt an crawls as sound and text in through the window from Kongens Have and down the wall. It manifests itself as an image of an anthill and reveals familial relations and social structures among ants.

Anna Vestergaard still wonders about the tone of the press release but doesn’t know how to ask about it without returning to the interview form. Do the artists believe that the female voice is ambiguous? Her body language is restless and her gaze alternates between the artists and the paper with the prepared questions, which the artists have already skimmed.

It is interesting that you read the press release in that way, because it highlights how difficult it is to express oneself in our mother tongue without being misunderstood. We do not believe that the female voice is more ambiguous than a trans person or man’s voice. Rather, we believe that there is an established masculine humour that laughs at the woman’s expense by claiming that she is subconsciously talking about something sexual. Furthermore, the joke reproduces the conception of the binary relationship as the norm.

A black cable winds its way across the floor and forms the words ‘Que Faire’. The cable transmits power to a smartphone and speaker lying on a warped plant stand. From here, a choppy digital voice describes the experience of reading the short story The Gold-Bug by Edgar Allan Poe and subsequently finding that elements of the plot suddenly figure in the subject’s own life.

We have nothing against referencing male authors in our works; we use them because of their content in relation to linguistic misunderstandings and use the subjects that the texts deal with on the texts themselves. In the film Le Mari, the artists Signe Boe and Marie Raffn are seen in clothes and surroundings that might call to mind to a fin-de-siècle wedding. While Marie Raffn (le mari) paints in the summer garden, Signe Boe reads a letter from Sigmund Freud describing a patient who, at the age of ten, suffered an anxiety attack when playing with a beetle. In the course of his therapy, he realises that during his bilingual upbringing (he is born into a French family living in Vienna), he had heard his single mother, perplexed over a marriage proposal, asking the question ‘Que faire?’. As a child, the patient mistook this for the German Käfer – a beetle. The text of the film is Freud’s text that has undergone a translation into homophones. One sees close-ups of Signe Boe’s mouth, whose movements do not correspond to the words heard, but rather to a homophonically similar version of the same text.

I don’t know whether we have found the right form to replace a traditional interview. In fact, I am unsure of who said what. The exhibition runs until 6 September but also functions as a proposal for a future exhibition in another location (Aperol pose oil foreign exhale bee Jeanne). 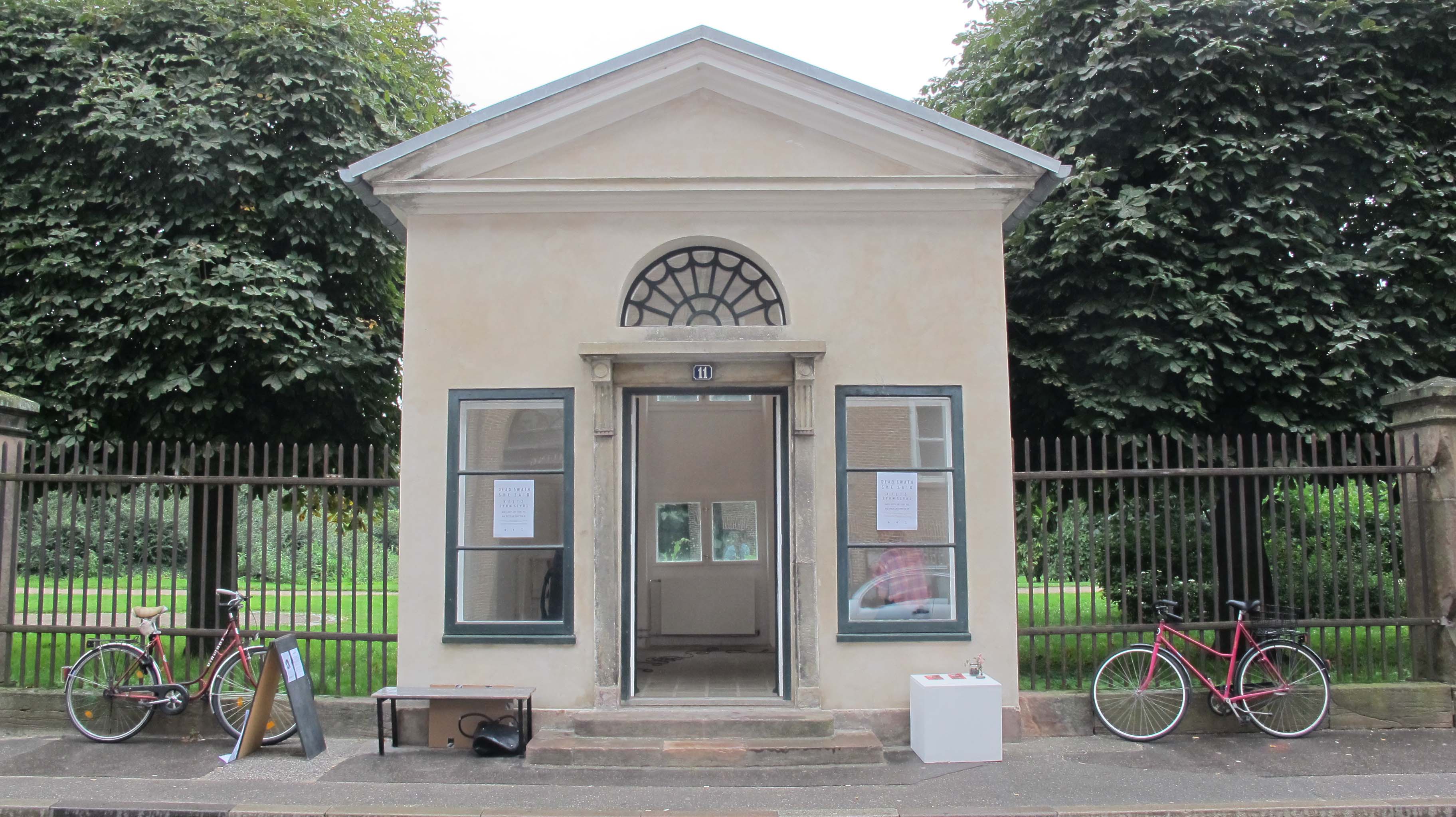 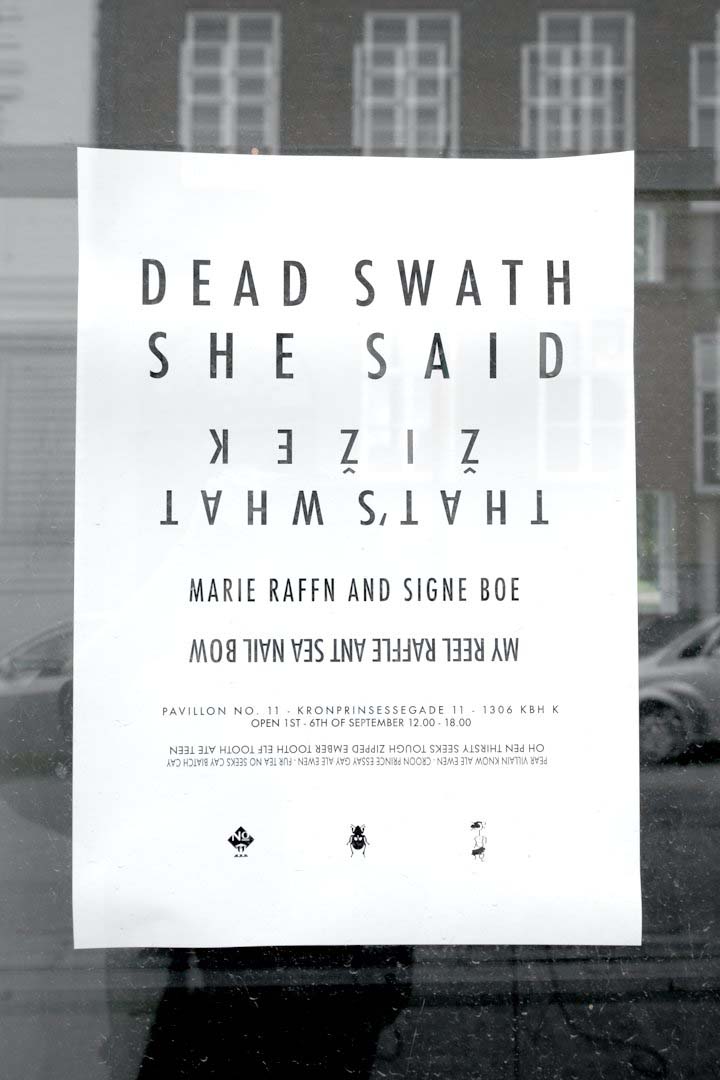 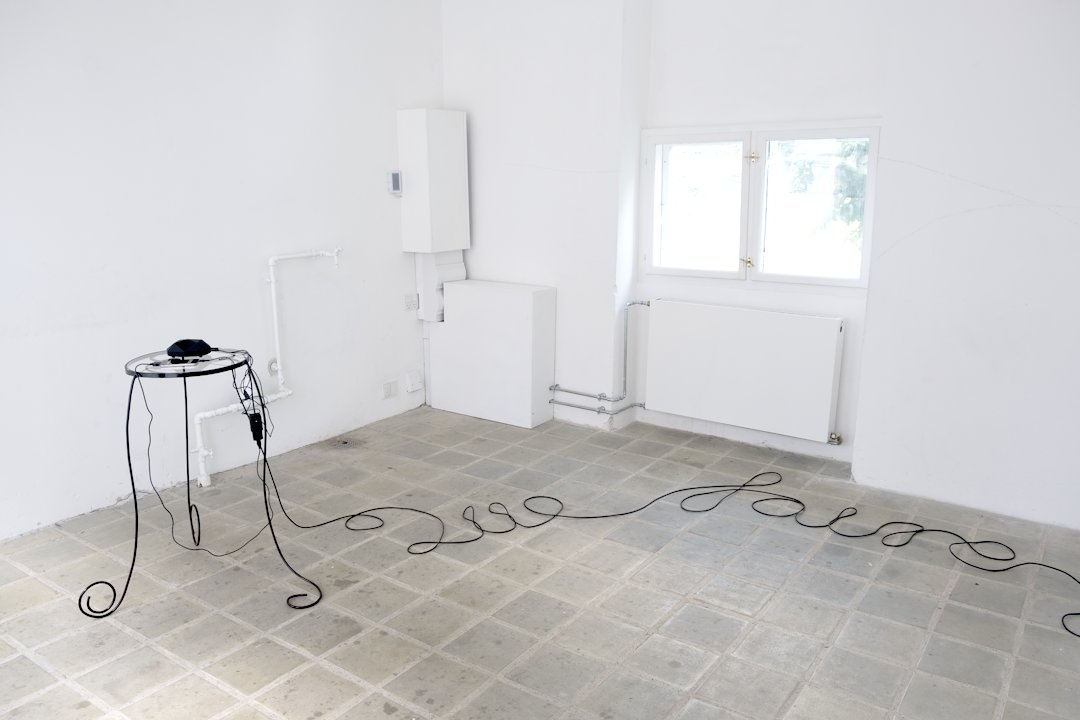 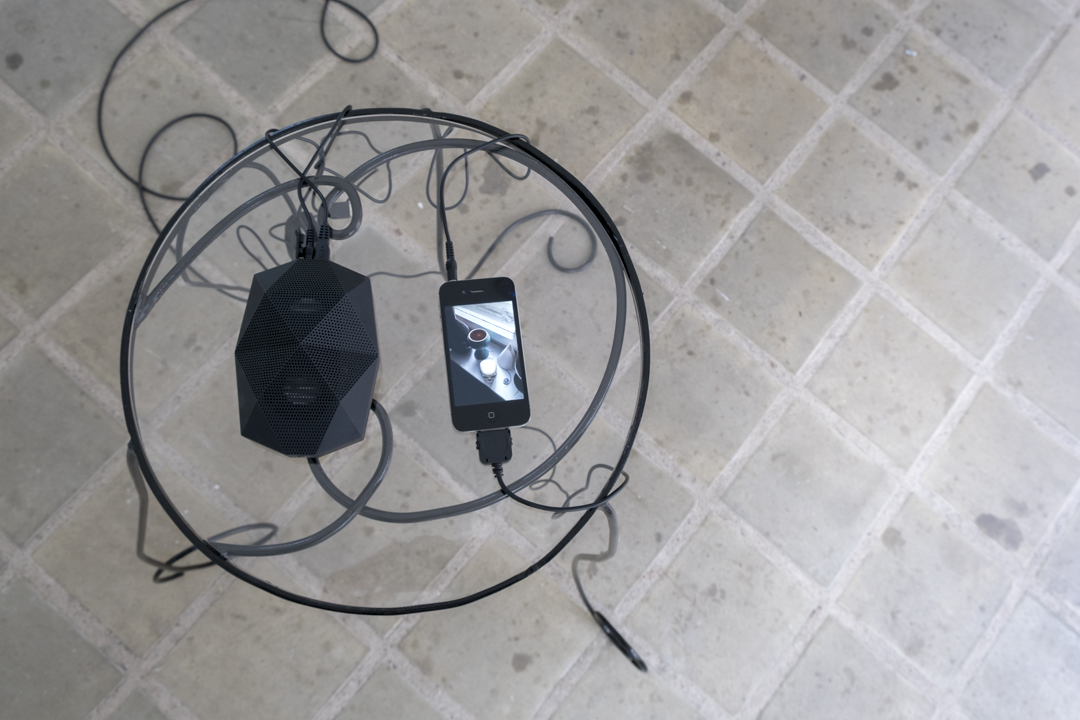 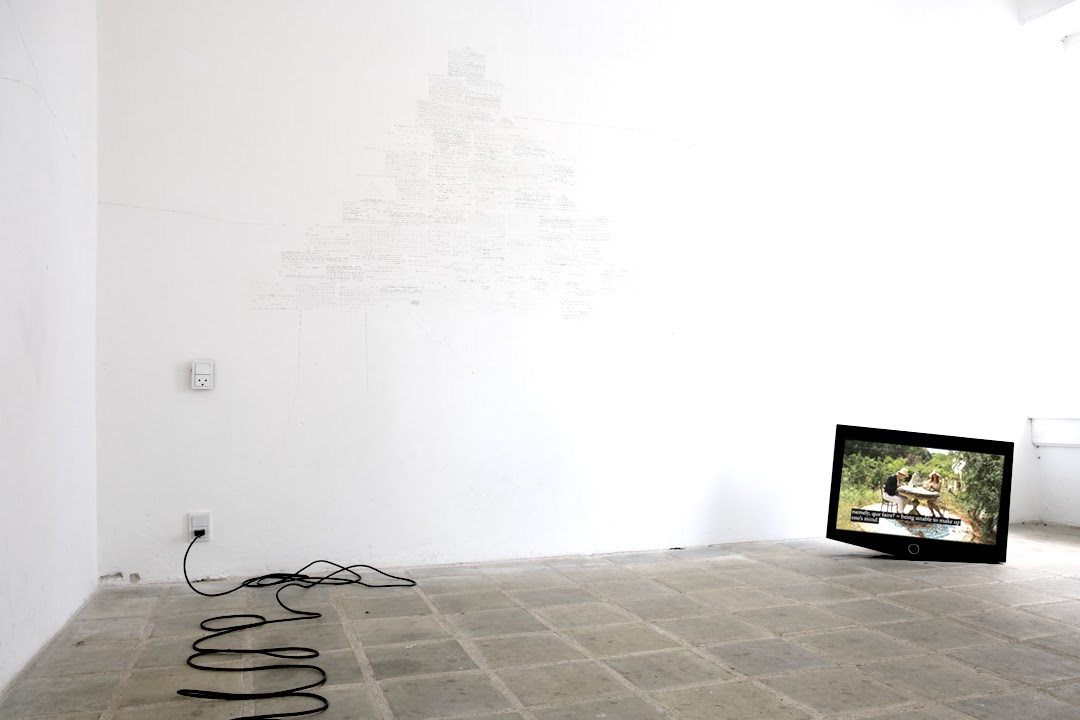 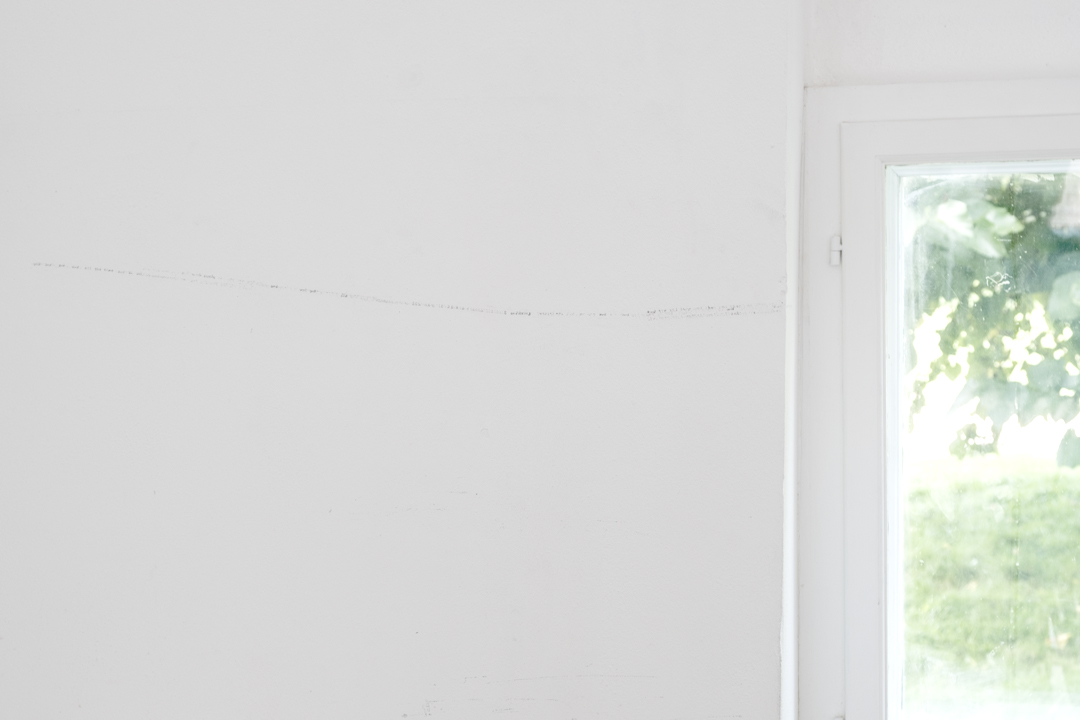 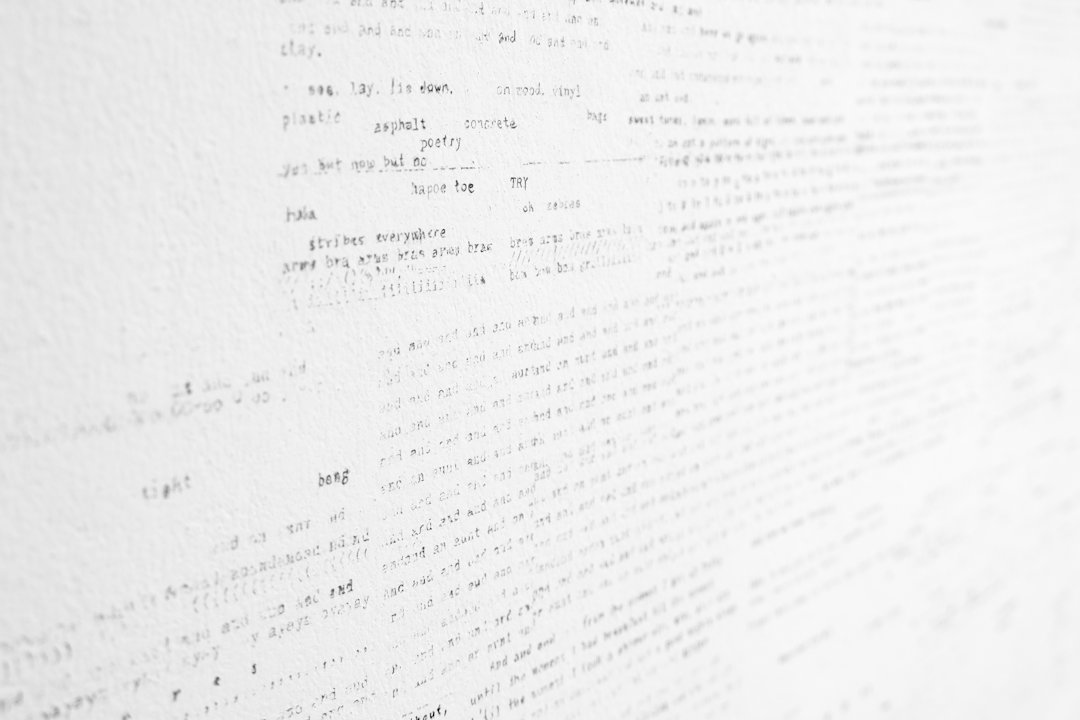 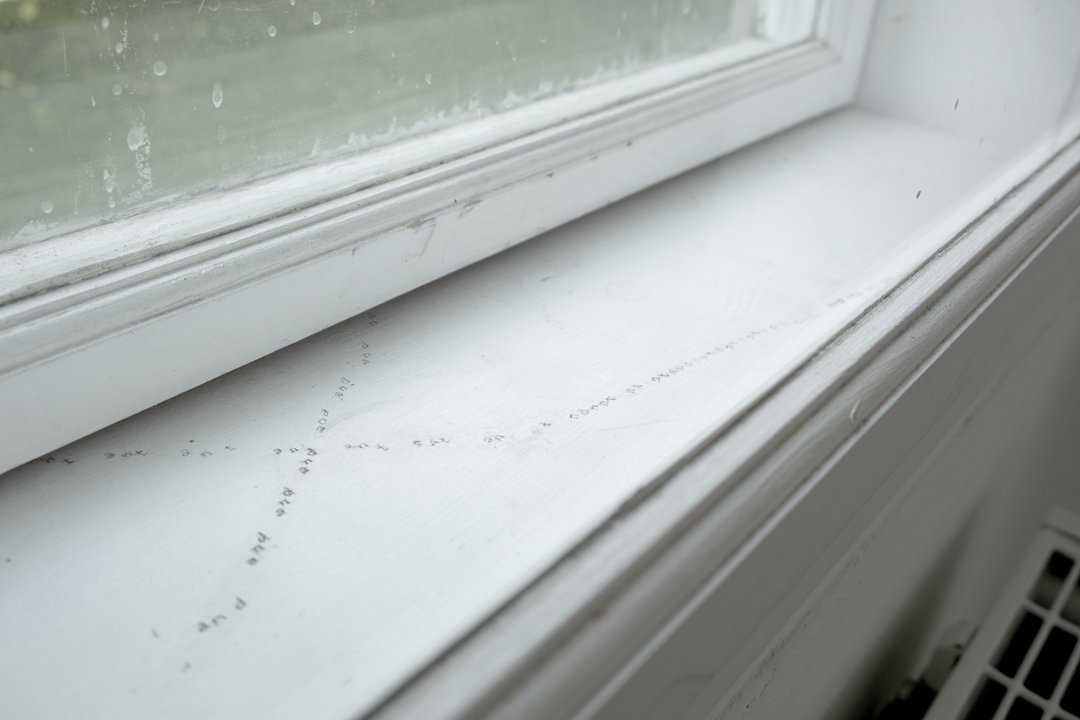 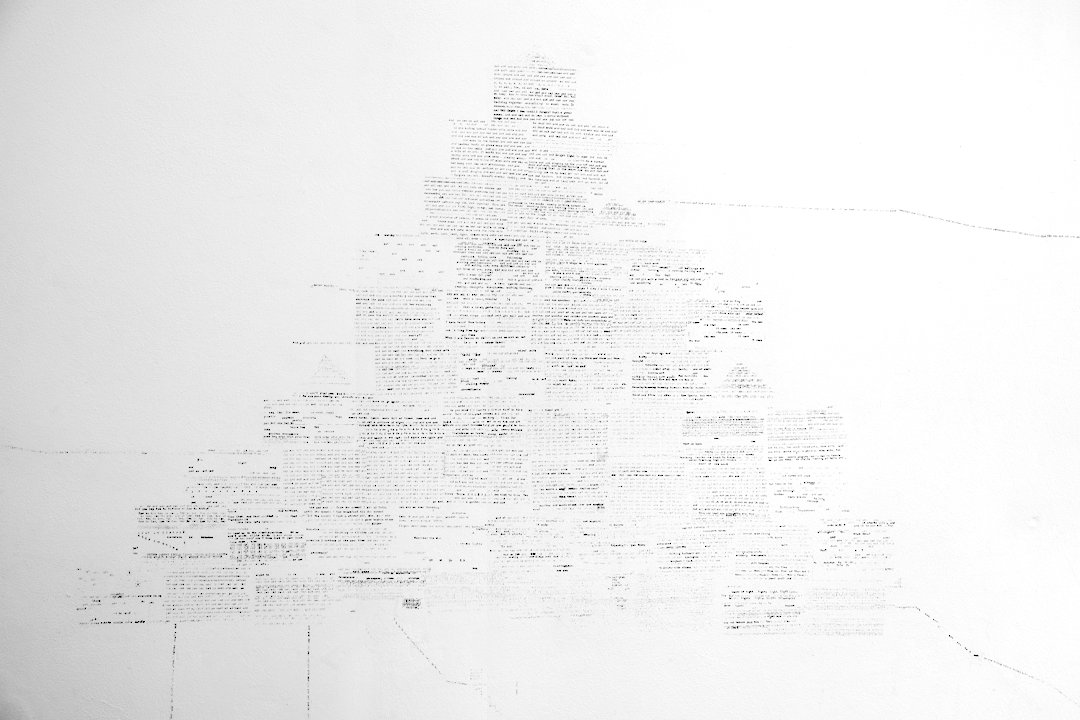 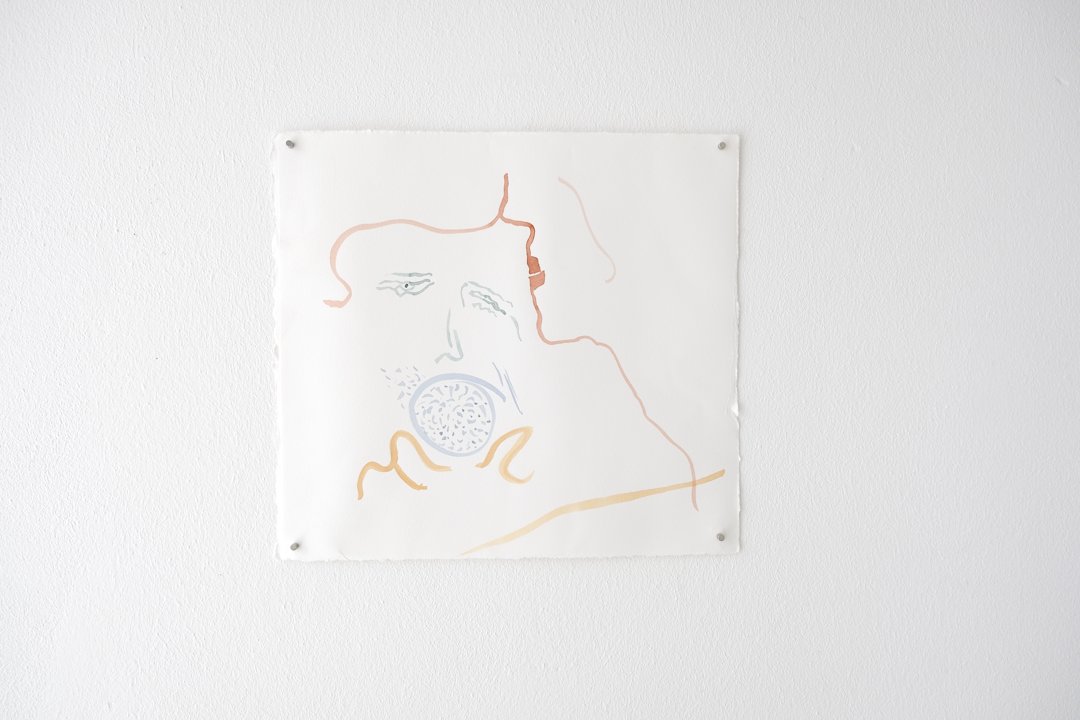 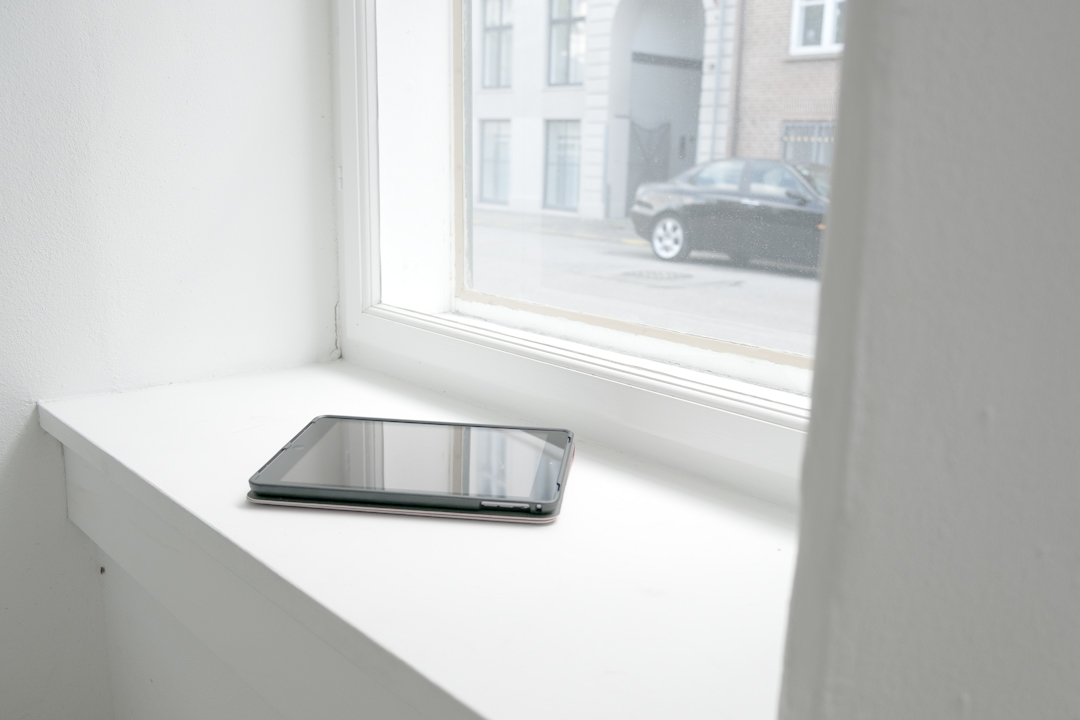 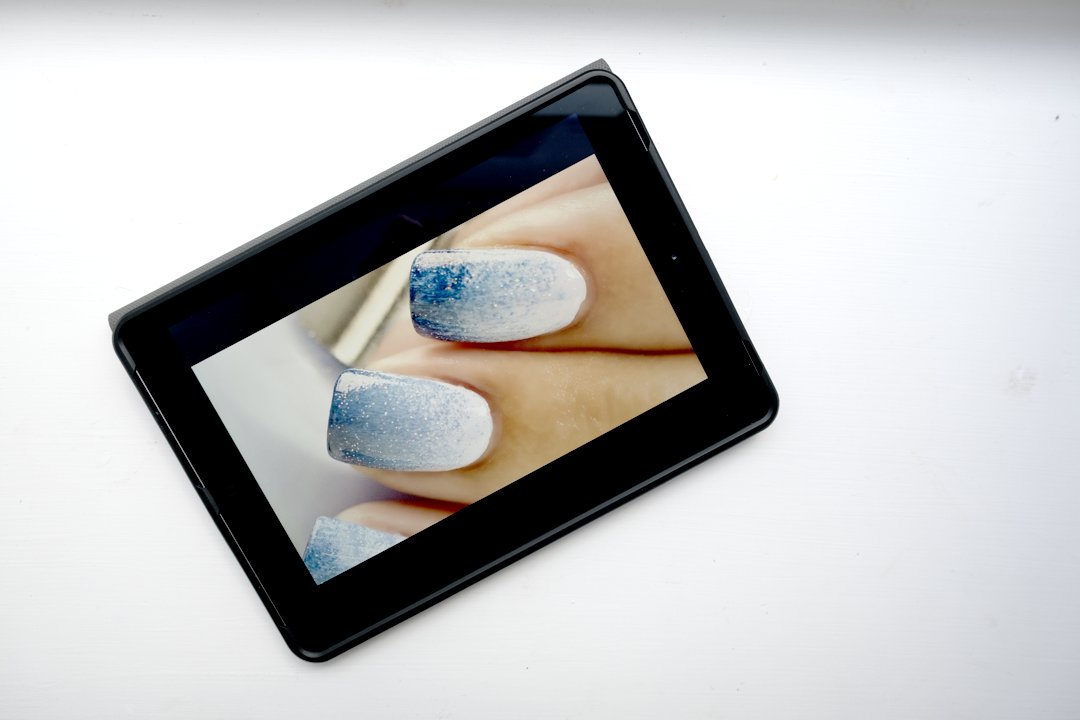 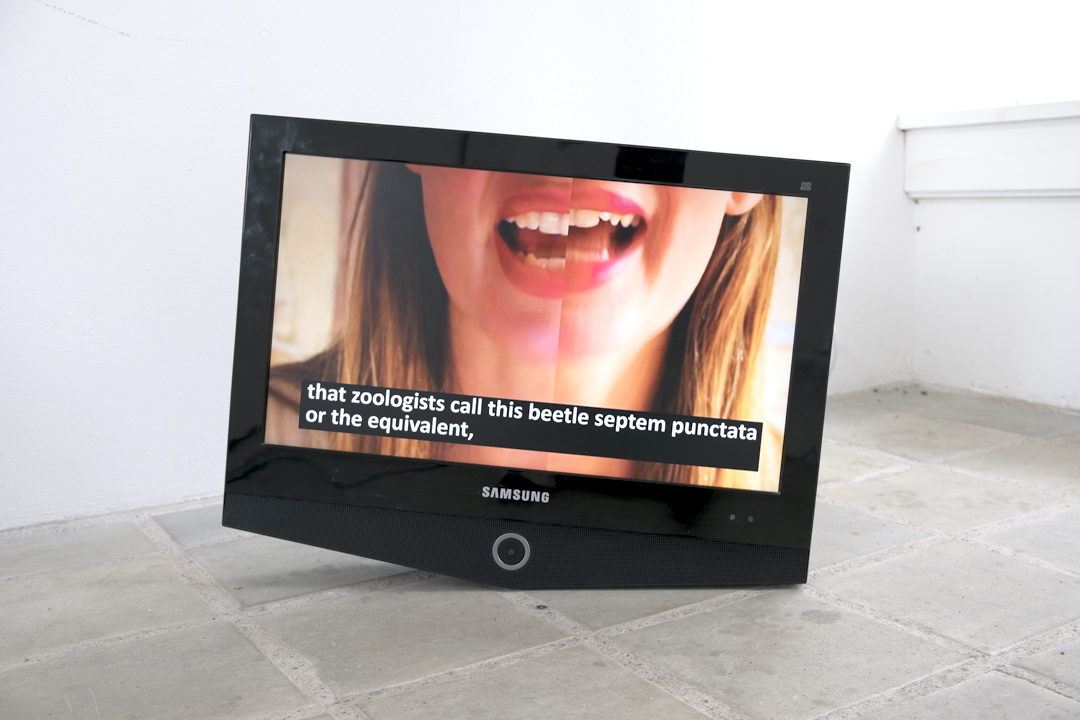 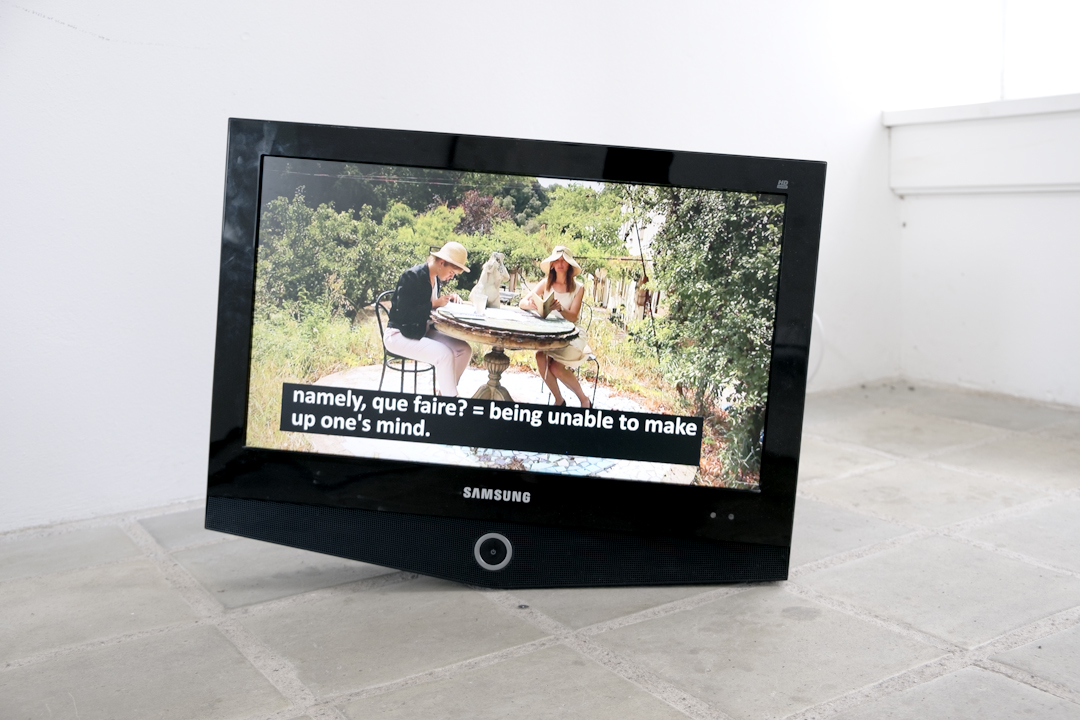 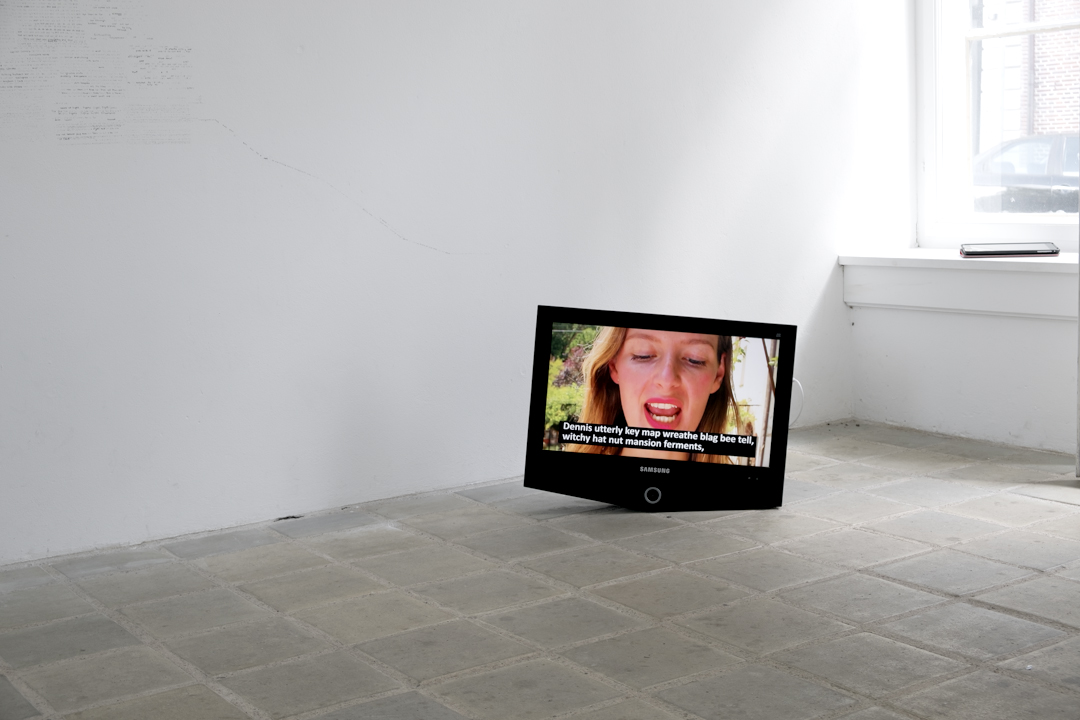 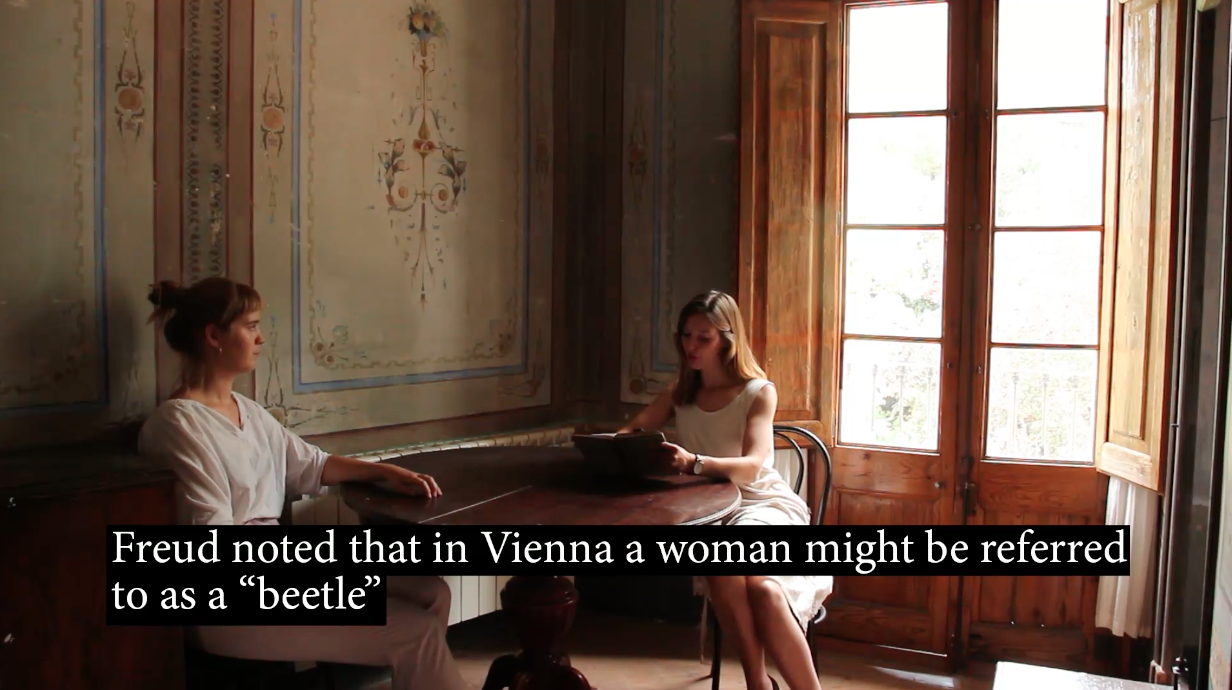 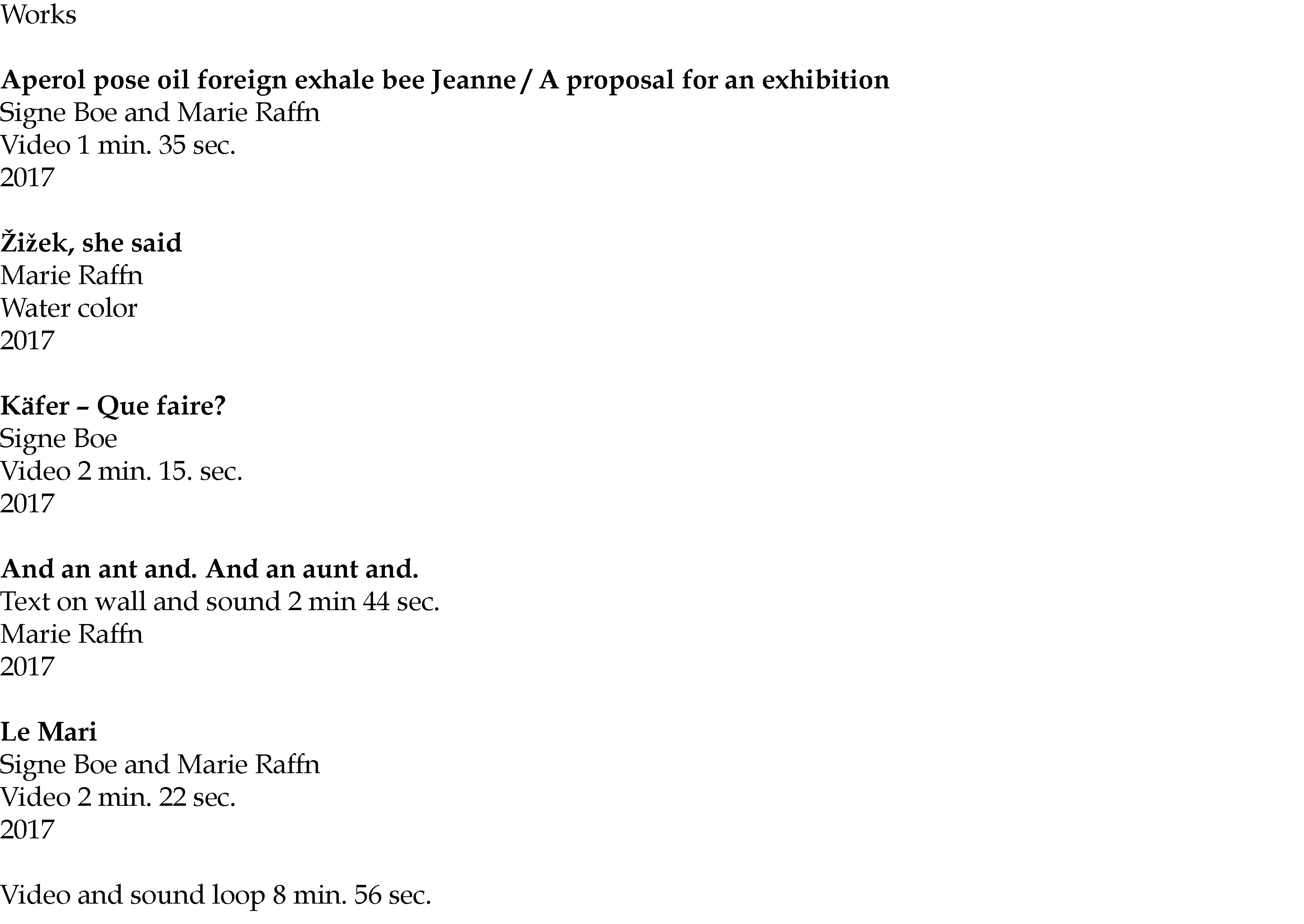